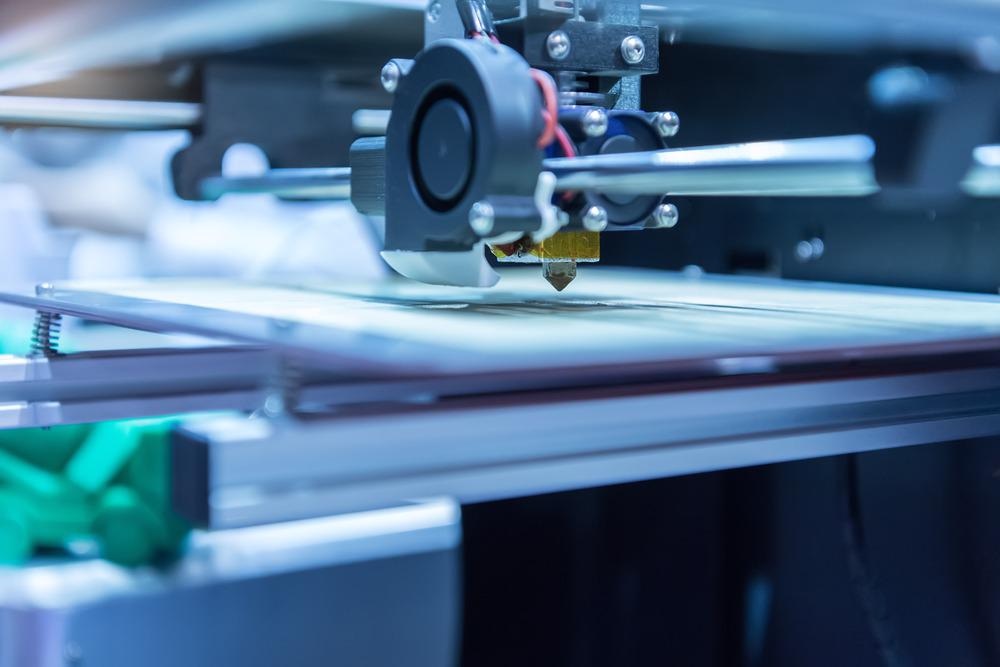 Scientists at Lawrence Livermore National Laboratory in California have developed catalytic electrodes using direct ink writing, a 3D printing technology. The novel electrodes presented in the paper possess superior catalytic and electrochemical performance for use in several next-generation devices. Their work has appeared in the journal ACS Au Materials.

Global energy consumption is expected to increase by 50% by 2050, according to figures from the US Energy Information Association. This huge increase in demand presents challenges for scientists and governments, as human activity is intrinsically linked to global climate change and rising temperatures. To mitigate the effects of anthropogenic climate change, renewable and sustainable energy collection and storage technologies have been explored over the past decades.

Electrophotochemical water separation has become a beneficial technology, where hydrogen is produced and can be used for energy storage due to its high energy density and complete absence of carbon emissions. In this process, abundant, efficient, inexpensive and stable electrocatalysts are essential. To date, platinum has been commonly used as a catalyst for hydrogen evolution reactions due to its electrochemical inertness, high activity, and near thermoneutral binding energy. 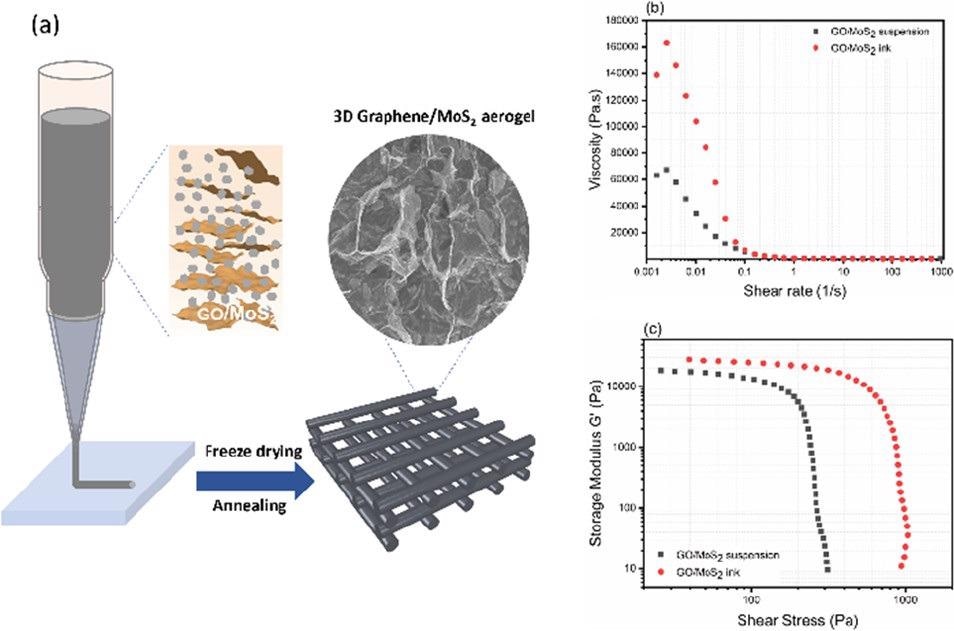 Several inexpensive, abundant, and stable materials with superior performance have been explored in recent years for use as electrocatalysts for hydrogen evolution reactions. Among these, the layered transition metal dichalcogenides have been the subject of research in materials science. The most promising and studied of them is MoS2with experimental and theoretical studies confirming the presence of catalytically active edge sites in the material.

However, their commercial application is hampered by stacking and aggregating 2D sheets. This reduces the number of active sites available for hydrogen evolution reactions. The electrical conductivity of these materials is inhibited, which makes it extremely difficult to design reliable electrodes. To overcome this problem, scientists are incorporating conductive fillers to produce composite materials. Graphene is a common filler for this purpose.

Graphene aerogels contain 2D sheets within a three-dimensional porous carbon framework. Their high surface area improves the flow of electrolytes, has high electrical conductivity and facilitates their use as catalysts. Additionally, these materials can be combined with other materials to provide a support scaffold that increases their catalytic activity.

Studies have been carried out on the creation of MoS2/ graphene aerogels with improved surface and enhanced hydrogen evolution catalytic activity. MoS 3D2Graphene / aerogels 6 to 8 times larger electrochemically active areas have been reported in the current literature. These aerogels have a significantly improved catalytic activity. Other studies have demonstrated nitrogen-doped graphene oxide-embedded aerogels with low overpotentials.

Conventional fabrication of 3D electrocatalytic electrodes involves processes such as electroplating, solution casting, and thermal gelation. It is well known that catalyst properties are influenced by structure and composition, and fabricating 3D catalysts with two-dimensional nanosheets could provide new opportunities in catalyst design and improving the performance of these commercially important materials.

In recent years, 3D printing, also known as additive manufacturing, has brought significant benefits to many industries such as manufacturing and biomedicine. Structures can be printed directly from a variety of precursor materials in a low-cost, low-waste, and flexible process with unique design freedom over conventional methods. Fused deposition modeling, direct ink writing and selective laser melting have been widely explored for electrode printing in recent years.

Direct ink writing is an extrusion-based process that prints structures layer by layer from an “ink” of various functional materials from an extrusion nozzle. The freedom of materials used in direct ink writing makes it beneficial for graphene/MoS 3D printing2 electrocatalytic electrodes based on airgel. The rheological properties of printed structures can be tailored using additives such as inorganic fillers and polymers. 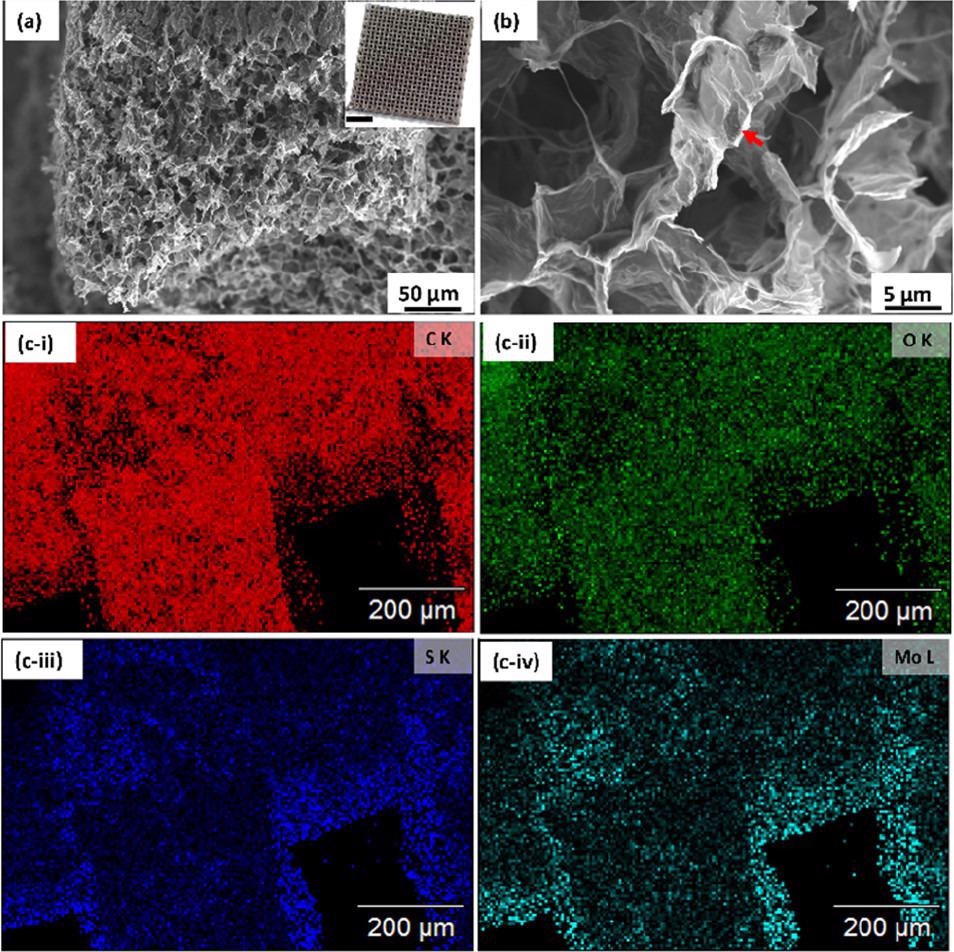 The study reported the fabrication of a catalytic electrode by combining commercially available MoS2 powders and a graphene airgel. Airgel is extremely porous. By combining these materials and using direct ink writing, the authors produced a hierarchical 3D catalysis framework. Printed electrocatalytic electrodes combine the advantages of both materials with the advantages of additive manufacturing.

A hybrid structured catalyst was produced using the new process introduced in the research. MoS2 the particles were highly concentrated in the electrocatalyst and were combined with sheets of graphene oxide. Lyophilization and thermal annealing produced a structure with homogeneously distributed MoS2 particles on the surface of an extremely porous graphene airgel framework.

The composite electrode possessed a high surface area and the hydrogen evolution performance at different currents was significantly improved in this material compared to the pure graphene airgel samples. The electrochemically active surfaces of the composite electrodes were not lost under high current operation, demonstrating the robustness of the material and the control of mass transport by 3D direct ink writing processes.

In short, the research demonstrated the development of a robust and efficient electrocatalytic electrode and the value of additive manufacturing to produce next-generation electrochemical devices.

Disclaimer: The views expressed herein are those of the author expressed privately and do not necessarily represent the views of AZoM.com Limited T/A AZoNetwork, the owner and operator of this website. This disclaimer forms part of the terms of use of this website.