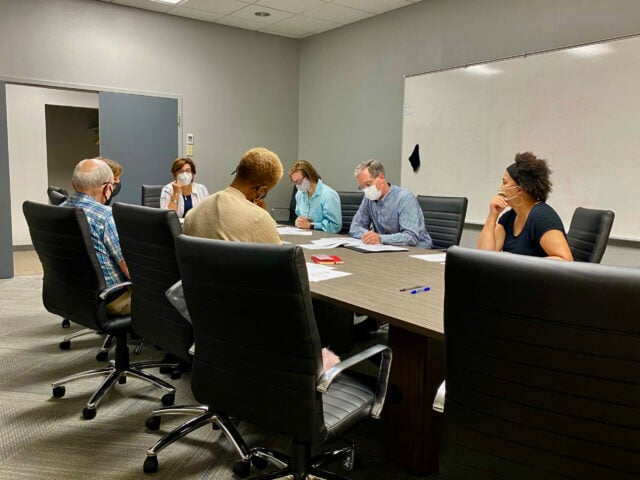 The development is located at 108 Park Place, which is the former AT&T building in Oakhurst. The property will become 33 condominiums and 10% of the units will be affordable housing.

“The adaptive reuse project at 108 Park Place will convert the former telecommunications office and training space into residential condominiums. Toll Bros. is the developer of the project, named Park 108,” said Angela Threadgill, director of planning and economic development for Decatur. “The project approvals, which came before the city’s Inclusive Housing Ordinance, include a development agreement with the Decatur Development Authority that requires three condominiums to be set aside as workforce housing.”

The Decatur Land Trust is partnering with Toll Brothers to find qualified buyers and ensure the long-term affordability of all three units. Affordable units are priced for households earning no more than 100% of the region’s median income, Threadgill added. The application and requirements for those who apply are available through the Decatur Land Trust.

The City of Decatur is also working on affordable housing projects and is seeing progress in the Oak Cottage Court project, located at 230 Commerce Drive. The name is based on the old name for Oak Street in the area before Commerce Drive existed, Threadgill said.

The Decatur Downtown Development Authority, at its May 13 meeting, increased its financial commitment to the Atlanta Neighborhood Development Partnership from $200,000 to $250,000 for construction of the Cottage Court project site.

In February, DDA signed a development agreement with ANDP for the Cottage Court project at 230 Commerce Drive. The new name of the project is Oak Cottage Court.

“After the recent numbers, those costs have gone up significantly, so they’ve come back asking us for another $50,000, going from $200,000 to $250,000,” Threadgill said. “The reason for that is that ultimately we want these cabins to be affordable as workforce housing. If we want to continue on this path, we need to invest a little more money to help close this funding gap.

The DDA previously had cost estimates for a retaining wall to the front of the property and site work that was around $300,000. Those costs rose to $725,000, Threadgill said.

The project will target a median income of the area between 80 and 120%.

In addition to these projects, city staff are working on two zoning proposals that will be submitted to the Decatur City Commission regarding missing mid-rise housing.

If a quadplex were built, it would be necessary to have one car per unit, so instead of having all four cars on site, the proposal would allow two of the cars to be on the street frontage in front of the quadplex.

“This is in line with the strategic plan because there are a lot of people who have come forward in our outreach sessions who are concerned about trees and stormwater, so it was a good compromise that we felt to go towards the community with to allow some of that parking will be on the street,” Kristin Allin, Affordable Housing Fellow, previously said. “It would only be if there was enough frontage, enough curb, and also if the parking is allowed on this street in general.”

Decatur is inviting comments on the proposals and comments must be submitted to the city by July 31. Here’s how to provide feedback:

– Attend the forum. Issues raised and questions posed will be discussed on August 17 in an online forum.

– Submit questions online and read the proposed changes to Missing Middle zoning, and submit questions using the pre-forum interview here. This online questionnaire will be open until July 31. Questions will be answered on the online forum.

More details and details can be found at decaturga.com/affordable housing.

If you appreciate our work, please become a paying supporter. For as little as $6 a month, you can help us keep you up to date with your community. To become a supporter, click here.

Want Decaturish delivered to your inbox every day? Subscribe to our free newsletter by clicking here.

The Newport Women’s Forum Scholarship is open for applications