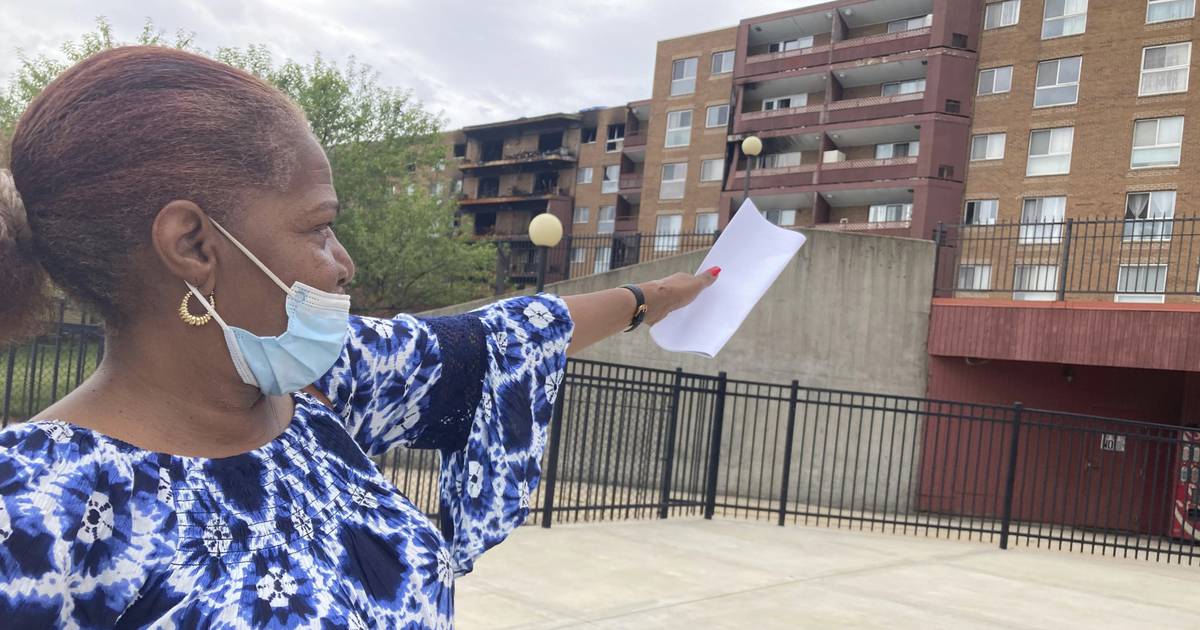 The United States Small Business Administration has opened an office in the Park of River Oaks condominiums in Calumet City, the scene of a devastating Memorial Day fire that killed a woman and displaced dozens, offering low-interest loans to affected residents.

The office inside the clubhouse is staffed by SBA staff, and Kim Anderson was among the first to line up Friday to apply.

She said she had lived at the resort for eight years and now lives in an empty unit on property owned by her sister. Anderson said she hoped a low-interest loan could help clean up smoke damage to her fifth-floor unit after the May 30 fire.

“I just miss my unit,” Anderson, 63, said Friday. “I’ve been so depressed since the fire.”

Wilhelmina K. Williamson, 85, died of thermal and inhalation injuries in the fire, according to the Cook County Medical Examiner’s Office. Seven other people were injured in the blaze, including three firefighters.

Williamson lived on the seventh floor of the building at 200 Park Ave., where the fire started. It is connected to two other buildings that face the River Oaks Golf Course.

Some 200 residents were relocated and Calumet town officials provided them with financial assistance, such as payment for temporary housing and food, and the town said after the fire it had made arrangements for some locals to stay in hotels.

Gloreatha Jones, who lived on the fifth floor toward the back or east side of the building where the fire started, said she applied for an SBA loan in hopes of being able to rent a small apartment.

She said she first spent time at four area hotels, then with her sister in Chicago and is now staying with her daughter in Dolton. Jones said she was told it could be two years before she could return to her apartment.

Jones owns a two-bedroom, two-bathroom unit in The Park, but wants to move out of her daughter’s house until her apartment is fixed.

“I just need something small,” she said.

Jones said she did not have enough insurance coverage on her unit to cover the amount of damage caused.

“I never thought the place would burn down,” she said.

Anderson said many of the park’s residents are older, and she wonders how they’ve coped since the fire.

“There are a lot of people older than me here who are on walkers and in wheelchairs, and they’re on fixed incomes,” she said.

Anderson said she was not home when the fire broke out, but received a text message to let her know.

Jones was on the balcony of her unit, which faces the pool, and she heard a woman screaming from the pool warning other residents of the fire. Jones said she sounded the fire alarm and quickly left the building.

She said her unit suffered mostly water damage, but she was barely able to recover. When asked if she thinks she could ever return to her apartment, Jones gave a hopeful look.

“I love this place,” she says.

The SBA is making loans in response to a July 1 letter from Governor JB Pritzker requesting a disaster declaration.

For condo owners, home loans are available and the SBA limits loans to a maximum of $40,000 to repair or replace personal property, and the maximum loan to repair or replace real property is $200,000. Loans can be repaid over a period of up to 30 years, and the loan application does not commit to taking the loan if approved, according to Janel Finley, SBA spokesperson working at the outreach center. .

If the borrower does not have access to credit elsewhere, the interest rate on home loans is slightly lower at 1.7%, but rises to 3.3% if he has the possibility of obtaining a loan by other sources, according to the SBA.

News from the southern suburbs delivered every Monday and Wednesday

It’s not just residents of the building who are eligible, Finley said.

Businesses that may have been impacted because condominium residents no longer frequent them can apply for economic harm loans, she said. The deadline to submit these loan applications is April 5, 2023.

Firefighters responded at 7 p.m. May 30 at the complex and encountered “heavy fire” from a second-story unit on the back or east side of Building 200, which is connected to other buildings in the park. . The fire spread to the seventh floor, according to Calumet Fire Chief Glen Bachert.

A final report on the cause of the fire has yet to be completed, but it appears the fire was started accidentally, according to Bachert.